Finding an advantage over 1000 competitors

Indoor races like January's Shootout at the Expo Center will be challenging for those teams that do not own an engine heater. Keep in mind that the race being indoors doesn't mean that it will be warm inside the Expo Center. To clear the air of fumes created from the continuous racing the building will be heavily ventilated, bringing cold air from outside into the Center. As shown in the chart below, temperatures in Tulsa in early January hover around freezing and this winter offers no exception as reports warn of a severe winter for the Midwest. (below). 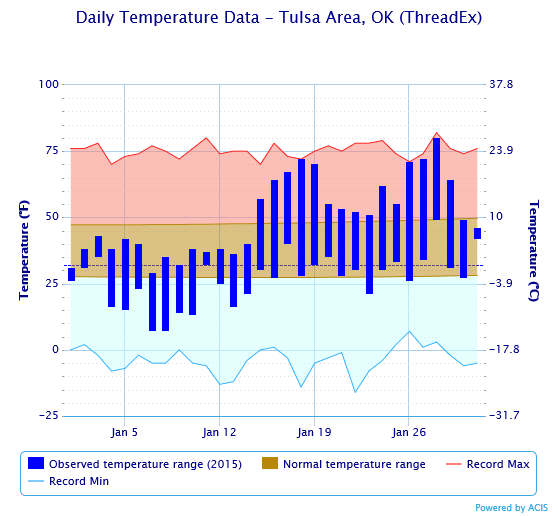 Finding an edge over other racers during the summer racing season is challenging, since everyone is in their element. Advantages usually occur in the shop or in last minute changes due to changing track conditions. While this still holds true during the winter, you can gain an advantage over teams that are out of their element in Tulsa. The single biggest advantage will come from warming your engine as early in the race as possible. Short races have the most passing opportunities at the start, and cars with cold engines are much easier to pass than cars that are warmed up. You can actually hear misfiring engines during the beginning of a race. If you can get temperature in your engine, you will gain a two-for-one advantage! This, however, presents a challenge for those racers without engine heaters.

We have seen the futile attempts of less fortunate teams to build heat in their engines. Early in the evening a single, brief session allows drivers to start their engines indoors. Later, they pursue a long push through the back of the building out into the elements where free revving their engines merely sucks in freezing, damp air. Lastly, they suit up and jam around the icy parking lot in the dark, but any heat generated is lost before they head down the ramp. They also cover their radiator and engine in a losing battle with convection. No matter what they try, these drivers are at a disadvantage to those with engine heaters.

Being an active midget racer and having competed at the Chili Bowl about 10 times makes me a bit of a weather expert here. My 2010 experience, for example, reminds me to inform you that there is a warm Indian casino in Tulsa where you can stay for a week while waiting for the airports to reopen!

View all posts by: Pete Davis